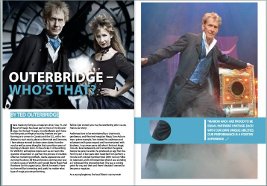 I have made my living as a magician since I was 19, and the art of magic has been part of most of my life ever since. For the last 15 years, my wife Marion and I have had the great privilege of touring theatres and performing arts centers in Canada and the U.S., with a few detours to such exotic places as Bermuda and Germany. I have always wanted to share some stories from the road as well as some thoughts that come from years of touring an illusion show. In the articles I will be writing for VANISH, I will explore topics such as our team, the question of assistant vs. partner, the process of creation, effective marketing methods, media appearances and running the show. All this and more is coming your way in future issues of VANISH, and I would like to thank Paul Romhany for this opportunity. I think the words I have to share will be interesting and useful no matter what type of magic you are performing.

Before I get started, you may be wondering who we are. Here is our story:

Audiences love to be entertained by a charismatic gentleman, and Montreal magician Magic Tom Auburn was a prime example. Tom treated his audiences and volunteers with great respect and he entertained with kindness. I was seven years old when I first met Magic Tom at a local restaurant, and I remember the goose bumps he gave me when he produced an egg from behind my ear. A few years later I watched Tom perform a miracle with colored handkerchiefs (20th Century Silks) on television, and I still remember where I was standing as I witnessed this impossible feat. This was a turning point for me, and then and there I decided I wanted to become a magician.

As a young beginner, the local library was my main source of information. I took out every book on magic I could find, more than once. I practiced tirelessly in front of a mirror and then tested my new material in front of friends and family. The pain and suffering they must have endured!

I performed my first “professional” show for $5 at a friend’s birthday party as “Magic Ted”. I was 12 years old. The experience was both terrifying and exciting. I began my performance with the 20th Century Silks. I vanished a handkerchief and it reappeared tied between two others. Five minutes later the vanished handkerchief re-appeared hanging out of the back of my jacket! Oops! I learned some valuable lessons from this performance/nightmare: Learn how to use a pull properly. Never perform with your back to a full-length mirror. And if you give out $7 worth of candy and streamers but you only charge $5, you are losing money!

At the age of 15 I began working at the Morrissey Magic store in Montreal. It was paradise! Owners Herb Morrissey and Richard Olsen had fabulous stories to share as well as excellent advice for any magician who walked in the door. My duties included cleaning dove pans and cups (which the company manufactured), turning Zombie gimmicks, printing and binding books, and of course demonstrating tricks behind the counter. An added bonus was the pleasure of meeting and getting to know most of the local magicians as well as encountering touring professionals like Jeff McBride, Derek Dingle and Geoffrey Buckingham.

Although I wanted to be a full-time magician at the age of 17, my parents strongly encouraged me to get an education. This was good advice! I studied marketing in college, and while I sat listening to a lecture on running a grocery store I thought about running a business as a magician. Accounting and bookkeeping were pretty boring until I realized that these skills could be applied to my magic business. Marketing a new perfume became marketing a magician, for me. I found perfume to be a fascinating example of the power of good marketing: people will pay anywhere from $5 to $500 for a bottle of fragrant liquid, depending on how it is marketed. It is all about the perceived value. I have always wanted to be the $500 bottle of perfume!

After college I applied my marketing skills to my magic career and explored a variety of key markets including birthday parties (don’t eat the cake!), restaurants (still addicted to spicy chicken wings), schools (kids can be brutally honest!), cruise ships (be nice to the cruise director), and corporate events (Can you make a motorcycle appear onstage while completely surrounded… next week? No problem!). In corporate work, I used the art of illusion as a powerful communicator – to magically produce a new executive, magically make the former CEO disappear, reveal a new product, or transform old sales projections into new sales projections.  I custom-designed illusions or an entire show to reflect a corporate image or to fit into an existing marketing plan, right down to customized magic trick invitations. I also consulted for film and television and had the privilege of working with such entertainment giants as the Cirque du Soleil and Tri-Star Pictures. For a few years I was even a local celebrity performing regularly on Quebec television.

I became involved in fundraising magic shows where the show sponsor had complete control of promotion, advertising and ticket sales. I provided promotional materials and a fundraising guide explaining how to promote the show, step-by-step. Ticket sales were divided equally between the sponsor and myself. On one occasion the sponsor was going to rent a large theatre to present our show, but they backed out because of the financial risk. I took over and produced the show on my own. I lost lots of money but… I used this venture to break into the theatre and performing arts center market, which is now my main source of income.

I would not be where I am today without my partner and my wife, Marion. Marion is a professional dancer who also performs some magic, and I am a magician who cannot dance! I hired Marion as a dancer and lead assistant in 1999, and she quickly became an integral part of the business. In 2006, we celebrated the ultimate magical moment when we were married. We have been together for 15 years and Marion’s passion for life and for our show inspires me on a daily basis. We have been told that the chemistry between us onstage is phenomenal. We enjoy hearing this. I know that we definitely have the time of our lives during our performances.

Marion has performed the world over and speaks five languages fluently… sometimes all at the same time! Marion studied ballet, jazz, character dance and tap in her home town of Düsseldorf, Germany, as well as in the Netherlands, the Ballet Master program at the Russian Academy of Theatre Arts (GITIS), and in Chicago with the Giordano Jazz Dance company. She has danced with world-class dance companies around the globe. Her magic career began as a dancer and assistant to illusionist Lee Pee Ville (Leif Hansen) at the Phantasialand theme park in Germany and she has some great stories to tell about being transformed into a tiger! Marion made her film debut in The Whole Nine Yards and has since appeared in numerous films and television productions including White House Down, Warm Bodies, and Barney's Version.

Marion and I are proud to be equal partners onstage, each with our own unique abilities. Our performance is a positive experience with an emphasis on enjoyment and wonder, and we take great care not to make any audience member feel uncomfortable. By combining the art of magic with theatre, dance, lighting and music, it becomes a theatrical experience worthy of the term “art”. We work with presenters to bring audiences and communities together for an experience that stays with them long after the final curtain comes down.

Our current show, OUTERBRIDGE – Clockwork Mysteries was designed to be performed in theatres for adult and family audiences, although we also perform at a few corporate events and the occasional casino. When we are not marketing, creating and managing our show, we are on tour, usually for about five months of the year. A typical day on the road can be a travel day, a media day with television, newspaper and radio appearances, or a show day which involves an eight-hour setup in the theatre, a 90-minute performance, and two hours to strike our show.

Our goal is to deliver an experience of wonder to our audience. We have taken a slightly different approach to the craft of magic by celebrating “magical moments in time” that our audiences can relate to. Our magic comes from our hearts and our own inspiration, not from off-the-shelf illusions or a magic store catalog. We work with a team of specialists to create unique, original, distinctive illusions.

We always hope the phone will ring with something huge that takes us to the next level, but this has never really happened. Our career has been a series of small steps up the ladder. We have learned that nobody will make it happen for us, so we have to make it happen for ourselves!

I will leave you with a few thoughts: Perform whenever you can. No matter what happens, good or bad, you will learn something. No learning is ever wasted. Try things that scare you. Videotape your performances. Be your own worst critic. Congratulate yourself. Make notes. Script your performances so you have a reference point that you can improve from. Never stop caring. Ask for feedback. Listen to feedback but don’t follow it blindly. Behave like the person you want to be. You are the product, so take good care of yourself. Look to other forms of entertainment for inspiration. Surround yourself with good people. Don’t just try to fool people – give your magic some meaning, strive to give your audience goose bumps, move them and make them care about what you are doing and… drink lots of water.