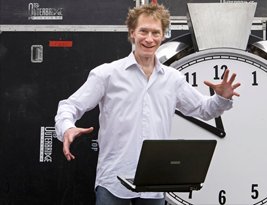 Magician Ted Outerbridge floats a laptop computer in the air outside his Pointe Claire home. Photograph by: John Mahoney, THE GAZETTE

The signature illusion performed by Ted Outerbridge, a soft-spoken Pointe Claire man who has become the most successful professional magician in Canada, is the levitation of his professional partner (and wife), Marion. She appears to float at waist level, never touched by Outerbridge’s hands.

Just as impressive, if less flashy, has been the way in which Outerbridge spent three decades methodically and relentlessly levitating a career from his days as a teenaged magician in the Town of Mount Royal working birthday parties and local restaurants. The secret ingredient, apart from talent: relentless, well-executed marketing.

Even when he was 12 and his brother helped him perform illusions for friends, Outerbridge understood that this was a business: “We wanted them not to leave with any of those pennies”, he laughs.

Now Outerbridge is on the verge of being one of the handful of the magicians anywhere who can play major venues internationally. This year he’ll play a major downtown Toronto theatre for the first time. “This is huge,” he says with rare effusiveness, because it opens the door to other big cities all over North America.Gross revenues for his show, Outerbridge – Magical Moments in Time have more than doubled over the past decade to an estimated $175,000 in the coming season.

Getting there, however, has been a long road, largely because magic isn’t a typical route to theatrical stardom.

This could be because it appeals to a smaller audience than music or drama. It could also be that it takes years of discipline to develop the more difficult illusions, leaving just a few who are able even to compete in the big leagues.

For whatever reason, only a tiny number of magicians ever reach the level of a Criss Angel or David Copperfield. Success in this field usually means the ability to make a living working trade shows and fund-raisers in high-school gyms.

Outerbridge, however, has bumped his show up to another level, playing about 100 dates a year across Canada, most of them in community theatres that are wary of booking a mere magic show. Magic, says Outerbridge, “is not perceived as art” on the same level as a play or a concert, which means that theatre managers must worry about tarnishing their reputation if an act is little more than sleight-of-hand tricks.

His response was, first, to work up a show with spectacular illusions built around a serious theme – the ravages of time. “Time is stolen from us” he says. “Our lives are constantly controlled by deadlines.” In one illusion, he’s suspended over the stage in a straitjacket with a 90 second deadline to escape. Of course he does, but by vanishing, then reappearing spectacularly in the audience. His second response, however, is maybe just as important: making it as easy as possible for theatres to sell the show.

“I give it all to them on a platter,” he says, producing his own press kits, posters and even promotional stunts, such as performing magic on local televison and radio shows. It adds up to a marketing package you might think more typical of a Walt Disney Co than a single performer.

“He does it all,” says an admiring Tracie Ward, executive director of the Rotary Centre for the Arts in Kelowna, B.C. “He’s artist, tour manager and booking agent. Ted’s in his own category there.” And it pays off, even though selling a magic show to a legitimate theatre is “very difficult,” she acknowledges. Indeed, the only one Ward has ever presented is Outerbridge’s.

One reason: Outerbridge has always understood that his skill as a performer would only take him so far. The rest would have to come from self-promotion and relationship-building, an effort that has built him a Rolodex with 1,500 contacts across the country.

‘I used to think early in my career that a theatre just wanted a great performance and high attendance. They do, but that’s not enough,” says Smillie. They also want the performer to do all the needed advance work flawlessly and then put on a performance without causing any hassles for theatre management.

Indeed, this unspoken part of the deal is so important that fine performers have been blacklisted when a theatre found their disorganization too much to handle.

Outerbridge figured this out years ago, and he not only works to be trouble-free, but to make the theatre’s job as easy as possible. He’ll even step in to put out fires.

The day before a date in the Toronto suburb of Mississauga two years ago, Outerbridge learned that the theatre publicist had been completely unable to line up media coverage.

Rather than register an angry complaint, he did the job himself. Calling a newspaper, he was rebuffed at first. So his second call, to the Toronto Sun, was from the newspaper lobby, offering the photo editor a picture of him levitating Marion in the middle of the street outside, right that minute.

In between such spectacular promotions, he spends several weeks a year attending conferences of agents and theatre bookers – known in the industry’s jargon as presenters.

Few artists bother with this grueling regimen, says Dana Kirby, an agent and president of Live Tour Artists in Toronto, but “Ted’s at every one, shaking hands and filling his calendar.”