MAGIC IN THE AIR 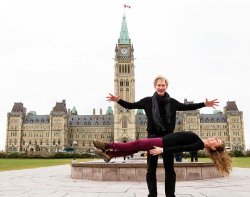 Illusionist Ted Outerbridge and his levitating wife, Marion, who dropped by Parliament Hill to give a taste of the kind of magical feats that are part of their show coming to the Shenkman Arts Centre this month. Photograph by: Wayne Cuddington, Ottawa Citizen

Marion Outerbridge floats on air, and husband Ted disappears. It's all part of the illusion show they are bringing to Shenkman Arts Centre.

Montreal’s Ted Outerbridge has been mixing up magic for three decades, disappearing, sawing people in half, and predicting the future. He packs it all into a show that blends illusion, magic, theatre, dancing, and a dash of wonder.

Outerbridge and his lovely and talented assistant Marion, who also happens to be his wife, were in Ottawa recently to promote their show at the Shenkman Arts Centre. They dropped by Parliament Hill, where Marion levitated a few feet off the ground in front of the Centennial Flame. Really. The proof is in the picture above, right? Then the Outerbridges decamped to a coffee shop to chat about the power of illusion, keeping secrets and Greta the psychic goose.

Smart people are easier to fool

Logical, educated people are often the most confounded by illusions, says Ted. “They say the more intelligent you are, the easier it is to fool you. It’s easier to deceive people who have logic. Their minds have been educated and programmed.

“If Marion were to disappear right now, a child might say, ‘There’s a trap door!’ But you know there are no trap doors in this coffee shop. The more educated you are, the more you rule out possibilities ... even possibilities that are perhaps the method we are using.”

Engineers get particularly frustrated by magic, apparently. They think they understand how things work. When someone floats in the air, it can be downright upsetting. One man wrote an angry email to the Outerbridges after watching Marion levitate during a show at the CNE.

“He studied engineering for many years, and everything he had learned got spoiled by our five-minute performance,” laughs Marion. “He was blown away. Basically, he said all the methods I have learned about are just ruled out.”

In one of Ted’s illusions, he vanishes from the stage, then appears seconds later standing in the audience. One evening, he recalls, “I reappeared in the audience, but someone was upset with me because I was blocking their view of the show. So they hit me.

“They were yelling at me to get out of the way. Then they realized it was me, and felt rather embarrassed.” Outerbridge wasn’t injured. “I was amused.”

They’ve never had any serious accidents, and Marion has retained all her body parts, despite being cut in two every night on stage.

The power of levitation

It’s been practised by everyone from Hindu gurus to superstar magician Criss Angel. Floating in air never seems to lose its appeal. “It visually says magic,” says Ted. “A lot of people dream of flying. We all wish we could fly. So that makes it a very powerful illusion.”

And no, he won’t tell you how levitation works, although you can Google it if you want to spoil the fun. The Internet is a great source of information on magic secrets. But that hardly matters, says Ted.

“Our illusions are based on existing concepts that you can find on YouTube, but we present them in an original way, so it’s a little more difficult to recognize some of the methods. But on top of that, it’s not about the trick, it’s about how we present it that makes it become an experience for people.

“The secret, in a way, is really secondary to the way it’s presented. It’s like someone playing the piano. Some people can make you cry when they play the piano, and some people make you cry for different reasons. With illusion, it’s the same thing.

“I mean, we bring an experience of wonder, and if you know the method, then that’s reduced, but I don’t find that modern technology has taken away people’s enjoyment of our show.”

The importance of theatre

Ted began his career at age 12 as “Magic Ted,” performing magic tricks at birthday parties in Montreal. Over three decades of performing professionally, he’s worked to develop a show with theatrical flair. “Our magic show is not based on a lot of big props,” says Marion, who joined the company in 1999. “We are telling stories with our illusions. It’s not about magical tricks as much as a theatrical show that involves magic.”

Marion brings her strong dance background, which she says “adds beauty to the show, and the smoothness, the transitions.”

Originally from Dusseldorf, Germany, Marion studied dance in Russia and was part of a famous folk troupe there. She also worked as a dancer for a magic show in the huge theme park Fantasialand near Cologne, Germany, but was upset by the treatment of the tiger and lion that were part of the show. “I felt sorry for the animals, to be squashed into a small cage ...”

She applied to work with Ted’s show. At the time, he was touring with a live chicken, but she was OK with that. “I loved Zelda the psychic chicken, she was a big star in our show for over 10 years.” Zelda has passed on. But they now have Greta, the psychic stuffed goose, who will appear in Ottawa with her amazing predictions.

Ted and Marion married in 2006. There’s a lot of magic shop talk at their Montreal home. But after touring theatres and cruise ships for four or five months in the fall and winter, they usually have a good chunk of the summer off. Ted grows beautiful flowers in the backyard, and Marion takes dance lessons.

Their bag of tricks

Some of the 20 illusions in the Clockwork show:

Time Machine: Marion Outerbridge is transported through various eras, emerging in costumes ranging from Medieval times to Victorian England to the 1960s. “Everyone wishes they could travel through time, go back and change the past,” muses Ted. “Slow time down, speed time up, savour a beautiful moment, get though a boring situation. So the time machine makes all this possible.”

Time Capsule: Random members of the audience will be asked questions — such as their favourite band, their favourite Ottawa activity or thing to see in the city. Ted Outerbridge opens a time capsule to reveal a piece of paper with the correct answers, written in advance. They guess correctly about 99 per cent of the time, says Ted, with a cheeky grin. “It’s scary stuff.”

And a few classics: Marion will be sawed in half and levitate in mid air, while Ted will disappear.