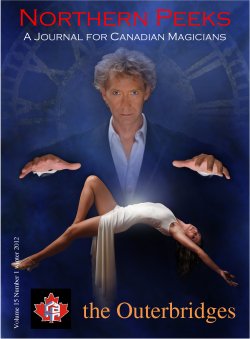 Cover Photo of Northern Peeks, the magazine of the Canadian Association of Magicians

The very name Outerbridge may summon up thoughts of links to other dimensions, magic being a part of that ethereal mosaic.

Pointe-Claire resident Ted Outerbridge got his first magician’s kit under the Christmas tree when he was seven years old. From that moment on, he was stamped with an obsession for the gossamer art of conjuring. And when he was 12 years old, he performed his first professional show for $5 at a friend’s birthday party:

“I did a 15 minute show,” says Outerbridge. “It was both terrifying and exciting. My first trick was making a handkerchief vanish and five minutes into the show it re-appeared hanging out of the back of my jacket. Still, the kids thought that was pretty neat, and I built up to a spectacular finale when I turned sugar into Smarties. For kids, you can’t go wrong when you make candy appear at the end of the show.”

Inspired by his childhood hero, Montreal’s Magic Tom, Outerbridge hit the libraries and frequented a local magic store/paradise, Morrissey Magic. By 16, he worked at the store, hitting the books in the backroom and hanging with magicians, earning their trust and being privy to their secrets.

Outerbridge: “I realized early on that I wanted to go beyond presenting puzzles and tricks. I wanted to give people goose-bumps and something that was meaningful to me. I wanted to move people.”

For the last 13 years, the husband and wife team of Ted and Marion Outerbridge have toured the world with stage acts whose theme has always related to Time. This season it is The Time Capsule Tour: It opens with a burglar played by Marion, breaking into the Museum of Time and stealing an hourglass, then literally vanishing. Ted attempts to capture her but is unsuccessful, for the message here is that no one can stop time from disappearing, and consequently each subsequent fast-paced scene is a reminder to celebrate each fleeting moment. “We all have time issues,” says Marion. “In life, there is never enough time, so we bring families together to celebrate.”

In the production, Ted time-travels by disappearing into a spectacular seven foot alarm clock. One of the many awe-inspiring moments is his impersonation of a medieval-shaman/healer who performs a scary illusion in which a basket containing Marion is pierced throughout with swords. Near the end of the show, Ted is placed in a straitjacket and into a box. Represented as a race against time, he has 90 seconds to get out. He re-appears in the audience, holding the missing hourglass.

In a highly symbolic segment, Marion gets absorbed by a television set, inspired by Bruce Springsteen’s 57 Channels and Nothing on. Marion Outerbridge is an accomplished dancer/choreographer. She recounts how she first met Ted: “I had just returned from Europe, choreographing a ballet at a state theatre, and a friend of mine said she knew an illusionist who was looking for a new dancer, and I thought this was excellent because I could both teach dance at Montreal’s Collège Français and continue to work professionally in shows. But Ted said I had to fit in the TV set! I thought this was hilarious because I had worked for a lot of big-name production companies in Europe and I never had to fit in a TV set, so I said sure. And I got so stuck and couldn’t get out. Eventually I did work it out!”

She had worked previously with a magician in Germany in a large magic show with tigers and lions. Marion was relieved to know that the only animal in Ted’s act was a media darling named Zelda the psychic chicken – moniker derived from her remarkable ability to lay a coloured egg depending on what colour an audience member would think of. When they performed in Fredericton, the piece where Zelda was blasted out of a cannon, and later re-appeared, created such a media frenzy that she made the front pages of The Gleaner, The Telegraph and the National Post.

Because of paperwork issues in transporting poultry cross-border, the hen was replaced with a stuffed goose named Greta who reads people’s minds and jots it down with a sharpie in her bill.

Ted’s latest brainstorm is the time capsule: In each community they are to perform in, they mail a metal box (padlocked) beforehand. During the performance they take a big beach ball and bounce it through the audience, and the person who catches the ball names a band or singer; the next person comes up with an activity, and finally they ask someone to a draw an image of the town/city. Someone from the audience opens the suspended capsule to reveal a jar inside. It is unscrewed and a giant paper is removed to reveal the same predictions, including a matching drawing. Weeks before they arrive, each theatre has the capsule on display in their lobby, promoting and building up anticipation for the act.

Recognized as one of the greatest magic acts in Canada, the Outerbridges won the 2011 Award of Excellence from Ontario Contact, an organization of theatre presenters. In 2010, they won Touring Artist of the Year in British Columbia’s equivalent BC Touring Council.

When they first introduced a full 90 minute show, theatres were not buying magic shows; magicians could rent a venue and self-present – called four-walling. So the Outerbridges did fundraisers for schools and provided all promotional material.

After a successful production at the prestigious Playhouse in Fredericton, word traveled fast and many theatres in the Atlantic provinces started to buy their show. Today, Ted still markets the show, but hands the bookings over to a business agent, Cameron Smillie, and booking agent Pierre Gravel International – who negotiate the contracts.

“Marion and I have been creating a relationship with theatres across Canada for years,” says Outerbridge. “And we regularly have a booth at the conventions. Theatres are becoming more open to magic shows. We were the first full stage magic show in New Brunswick.”

Marion believes that the dance aspect enhances the presentation. For each piece she brings in specialized choreographers depending on style. “Surround yourself with great people and you will grow,” says Marion. A Disney graphic artist produces their posters, while other professionals do the advertising copy. And they are constantly looking for feedback, asking people, listening and learning.

And when asked why people gravitate to magic shows, Ted responds: “The audience goes for the experience of amazement and escapism. The great magicians are entertainers who make people laugh and cry. I always wanted to perform a piece that came right from the heart and moved people to the point of tears. And we did it.”

He demonstrates how life is like a piece of thread – it has a beginning and an end, but the important things are the moments in the middle. The thread is broken into pieces representing the moments in time; it’s about the whole journey and how all of these pieces become one thread again in the end.

But perhaps the most magical part of it all is their marriage: Marion says, “We love being together. We miss each other if we’re not together, nothing is more fun than doing shows together. We visit countries and we don’t have to phone home in loneliness.”

When it comes to paying audiences, Ted believes in delivering a show that is at par with other world-class options. Great marketing is critical: “We do crazy publicity stunts. We levitate outside the theatre for the newspapers; we do magic on TV, talks at schools; we once sold 600 tickets in a day by doing tricks on CBC radio and getting onto the front pages of the local newspapers in Charlottetown. In Toronto, we called The Sun and said, ‘Hey, we’re floating outside.’ Once, a CBC journalist came over with a crew and we levitated him on-air. We did five live broadcasts and oversold the local theatre.”

It may take two to three years to perfect a magic piece, and if you’re going to invest that much time and expense, Ted believes that you should make it really original: “Be brave, try things that might not work and you will be rewarded with a piece that’s unique.” It took Marion four years to perfect a breathtaking quick change: Wearing a black dress, she walks behind Ted and emerges wearing a pink dress; it gets gasps.

Marion: “What is important to us is that the audience sees how much fun we’re having. We do it from our hearts and we want to share and afterwards meet the audience.”

For more information on this world-class show:
website: www.tedouterbridge.com or call 877-OUTERBRIDGE.