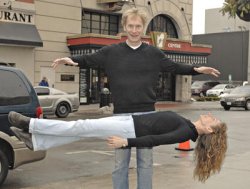 He may not be as well-known as David Copperfield or Criss Angel, but Ted Outerbridge is growing in popularity and is confident his illusion act will keep tonight's Sanderson Centre audience astounded, mystified and begging for more.

"This show is the biggest touring illusion show in Canada," Outerbridge said across the street from the Svanderson Friday, just before setting up the illusion of levitating his wife and show partner, Marion.

"We were recently nominated for touring artist of the year."

Outerbridge has been involved in magic since he became fascinated by a TV performer from his home of Montreal as a boy of 7.

"By 12, I was 'Magic Ted' doing birthday shows," he recalled. Now, at 46, he and Marion are touring the country, headlining mid-sized venues like the Sanderson. And, though they use some time-honoured illusions, they present them in their own unique and engaging way.

In addition to the levitation illusion, Outerbridge presents several other "how-did-he-do-that?" moments at Outerbridge: Magical Moments in Time, including one where he disappears from the stage and reappears in the audience.

"The show is really a blend of illusion and theatre," said Outerbridge, noting that it also relies heavily on Marion's skills as a trained professional dancer, learned in her native Germany and refined at the best schools in Moscow.

"What really sets it apart is that we are creating illusion, but relating it to day-to-day life. Marion doesn't just disappear in a box, for instance; she climbs into a television and disappears -so she's 'absorbed by television.' "

In another clever set piece, the Outerbridges play on everyone's dislike of having to wake up by alarm clock.

"We have a seven-foot-tall alarm clock," he said. "So, I climb into the alarm clock and we travel back in time. Marion turns the hands back and I'm gone -or, the part of me that was in the clock is gone. In our time-travelling I reappear as a game show host from the '60s."

More "time travel" follows. "And then we re-enact a bizarre medieval ritual... we're back to the days when we could have been burned at the stake."

Another entertaining part of the show involves the Outerbridges' talented fowl, Zelda the Psychic Chicken. Zelda's from a show-business family, the illusionist revealed -her parents belong to Celine Dion.

"Zelda's recently perfected a card trick," Outerbridge said. "She reads someone's thoughts and projects a card (that has been selected)."

The best part, he added, is that "she works for chicken feed."

Above all, Outerbridge said, the show works because he and Marion have tailored it to showcase their own strengths and personalities.

"There are quite a few magicians whom I am impressed with," he said, "but I have learned that in order to succeed I have to be me -and it's taken me years to learn how to be me and not someone else.

"Life is good. We're touring Canada and breaking into the United States."

And very soon, he hinted, something could happen that will make them into household names around the world.

"There are several possibilities which (if they come to pass), will change everything." Just what those are he wouldn't say. But, then, a good magician keeps his secrets close to his vest.