ORIGINALITY IS KEY TO OUR ILLUSION SHOW 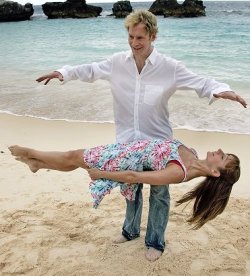 Bizarre medieval rituals, a disappearing woman and a psychic goose are just some of the mind-boggling tricks that make up the family illusion show Magical Moments in Time.

Time is the main theme of the award-winning show coming to City Hall this Friday through Sunday as part of the Bermuda Festival of the Performing Arts.

Master of the show Ted Outerbridge, who has family connections in Bermuda, will travel back in time to imitate a 1960s game show host.

He will perform medieval rituals and will even predict the contents of a Bermuda time capsule that will be created by audience members each night.

His wife Marion, who is also his glamorous assistant, will dance, get cut in half and disappear while Greta, a stuffed goose, will predict the contents of audience members’ pockets.

This is no small town show. Montreal born Mr. Outerbridge and his wife were named 2010 Touring Artist of the Year by the British Columbia Touring Council, while Mr. Outerbridge has acted as a consultant to the world famous Cirque De Soleil.

His magical performances have also appeared on Much Music — Canada’s answer to MTV and at the Just For Laughs comedy show in Canada.

Mr. Outerbridge said that one of the keys to his shows’ success is keeping the illusions fresh and innovative.

“I used to perform at private parties, church basements, corporate functions and restaurants but then slowly moved towards theatres — and the illusions and show became bigger and stronger,” he explained.

“We are now the number one touring illusion show in Canada and we are starting to do some work in the United States.”

“Originality is also a big part of it — the magic I perform is not magic you see performed everywhere. It is magic illusions we have developed that are more unique.”

Any tricks that may seem familiar promise to have an original stamp.

For example — while he appears to cut his wife in half, a trick discovered in 1918, Mr. Outerbridge has members of the audience holding her head and her feet during the trick.

His newest illusion is the piece de resistance in the Magical Moments in Time Show.

“On the night of the show the audience are going to decide what to put in a Bermuda time capsule.”

“I have predicted the contents and written them down, locked it inside a jar which is locked inside a box.”

“The prediction will come true during the illusion.”

“Communities have been coming together since the beginning of time to create time capsules for future generations. It is a beautiful celebration of the community. “People used to paint in caves and the pyramids are another great example. That inspired this illusion. We are really excited about that concept.”

Mr. Outerbridge said he and his wife have been perfecting the ­illusion for three years.

This will be the first time Mr. Outerbridge has performed in Bermuda for some 28 years. He used to visit his grandparents here when he was growing up.

His first show in Bermuda was at the age of 19.

But his love for magic came much earlier. When he was 12 he was charging five dollars a show to his neighbours.

“It was the experience of wonder and the goose bumps I got when I watched a magician when I was seven years old. He performed a magic trick that completely blew my mind.”

“I was really amazed and wanted to do what he was doing.”

“I started reading books about magic and trying out tricks on people. I performed a rope trick on my father and I fooled him with it when I was seven. I felt like a million dollars because I could do something that my father couldn’t do and I amazed him.”

There are limited tickets left for the Outerbridge Magical Moments In Time show. Visit www.bermudafestival.org